Pyrmont Bridge is one of the world’s oldest surviving electrically operated swing-span bridges, and one of the most utilised landmarks in the precinct. During it’s 117 years of active service, it has accommodated wagons, large animals, pedestrians, bicycles, motor vehicles, and – for a brief period – a monorail. So it’s no surprise it’s due for a little maintenance. The NSW Government has committed $23million to repair and upgrade of the bridge, taking place in stages over the next 5 years.
The first stage, which should be completed by the end of next year, will focus on repairs to timber piers. That will be followed by repairs to trusses and pylons. Some of damage requiring attention is below the waterline, and some can be attributed to the building and consequent dismantlement of the ill-conceived monorail.
Interruptions to traffic across the bridge are expected to be minimal. Currently, an estimated 6 million pedestrians and cyclists cross the bridge each year with a further 600 vessels passing through the opened swing gates.
The bridge is heritage listed as a National Engineering Landmark, as well as being an iconic fixture of Cockle Bay. All efforts will be made to preserve original features and minimise changes. 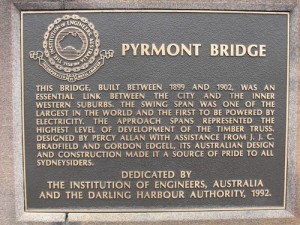