I’ve never actually lived in Pyrmont, but have worked there on & off as an artist since the early 1980s.The CSR Refinery & Distillery, Pyrmont Power station, Ways Terrace, Royal Edward Victualling Yard, Jones Bay Wharf & the Anzac Bridge were just some of my studios.

I can’t think of anywhere that has changed more than Pyrmont/Ultimo. By the 1980s Pyrmont’s population had dropped to less than 2,000 people, & nobody knew it except the few who worked or lived there. ​It was so close to the CBD, yet strangely invisible. It became a whirlwind of demolition & urban renewal. As the momentum of development rapidly gathered, I continued to record this area with an increasing sense of purpose and urgency. My paintings became a narrative of the abandonment, decay, destruction and reconstruction of an inner-city suburb – a metaphor for deeper changes within Australia. Pyrmont has changed beyond all recognition.
The pubs have been gentrified, while the handsome Federation warehouses of the Royal Edward Victualling Yard have become apartment blocks. Now Pyrmont is a booming media, IT & entertainment hub, one of the most densely populated suburbs, & the prototype for the future development of Sydney. My galleries used to ask me where “Prymont” (!) was, & ​ even try to change the titles of my paintings to somewhere they recognized eg. Paddington or the Rocks.

Unlike most artists, I paint “en plein air” to capture the elusive spirit of place, so I get to meet the whole neighbourhood sooner or later. Despite the challenges of working outdoors, I set up my easel by the side of the road, on windswept rooftops and demolition sites. When I started to paint in Pyrmont/Ultimo I must have met everyone who lived or worked there. Pyrmont once belonged to the wharfies of Darling Island; the engineers of the Pyrmont Power Station & the workmen of the CSR. Most literally lived next door to their work. I’ve kept in touch with quite a few of them, even if they have long since left the area.

Anyone who isn’t an artist, thinks of the derelict “Terminus Hotel” & the “Darling Island Bond & Free” store at 12 Pyrmont street as eyesores. However I have a great affection for these buildings as they remind me of Pyrmont’s past. I also love the charming heritage precinct of Union Square.

“Culture at Work” is a marvellous venue & I would love to see even more art galleries spring up in the neighbourhood. I also hope that the Powerhouse Museum remains, as it’s such a wonderful link to the area’s early industrial history.

Being invited to work from the top of the half-completed Anzac Bridge was a dream come true. I used to be terrified of heights, but the view was so spectacular that my fear disappeared. The entire city was beneath my feet & I could see the rooftops of all of my studios. It was the highlight of my entire series of Pyrmont paintings.

Although Pyrmont has undergone an amazing transformation, there are traces of its early industrial past if you know where to look. There is still part of the original 1904 Pyrmont Power Station incorporated in the Star Casino. Although it was an industrial building, it has exquisitely carved sandstone details, & stained glass windows in the toilets!

Pyrmont/Ultimo is so close to the city, but has managed to keep its own separate character – the best of both worlds. 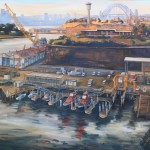 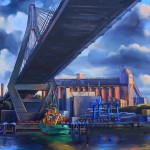 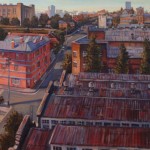 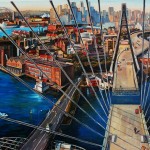 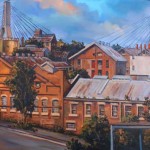 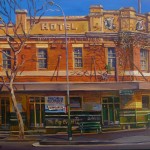 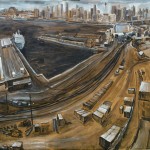