If you walk through Wentworth Park and look up at the Grandstand you would never guess that inside is a world of people creating other worlds. The Academy of Interactive Entertainment (AIE) houses its studios there and is Australia’s foremost educator in 3D animation, game design and visual FX.
The institute began in Canberra around 21 years ago and opened in Sydney in 2009. It now has campuses in several major Australian cities and a handful of cities in the US,  plus an online campus and a mobile studio.
Simon Freeman is the Assistant Director of Marketing & Business Development at AIE. He describes their courses as high level and very much career focused
“Everything we do for our students is to make them as employable as possible once they graduate with us. So there’s lots of relationships with industry – we’re always talking to them and finding out what software they’re using or what kind of skills they require and we’re catering our courses as much as possible…” says Freeman.
To that end they ensure they have the latest technology and software and engage as much with key organisations as possible. There are good opportunities for work in Australia, but it is very competitive. The average employment rate for AIE is around 70% – well above the tertiary average.
Students have had games picked up by Playstation and graduates have gone on to work on films such as The Hobbit, Avatar, Harry Potter, X-Men and the Marvel Films, as well as the series Game Of Thrones. Many end up working at Animal Logic while a number go into simulation technology for the Department of Defence.
“Students that are willing to look at other options – there’s a lot of opportunities out there for them,” says Freeman.
AIE also seeks partnerships with tech organisations such as their current partner, Microsoft.
“We’ve converted an Airstream trailer into a mobile classroom that we take around to regional centres around Australia,” explains Freeman. Microsoft helped kit out the trailer and supplied Surface Pros so that remote students can sample a digital media learning environment.
Freeman admits that the field is still dominated by males but says AIE is keen to encourage more girls to consider entering the industry. Their mobile classroom targets all-girl schools and they have teamed up with Women In Games as a sponsor to help promote participation by women. 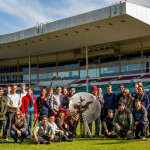 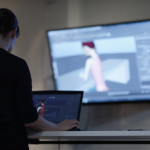 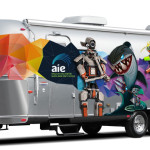 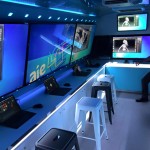 Inside the mobile classroom